Story Behind The Image “Tufa Towers at Sunrise” 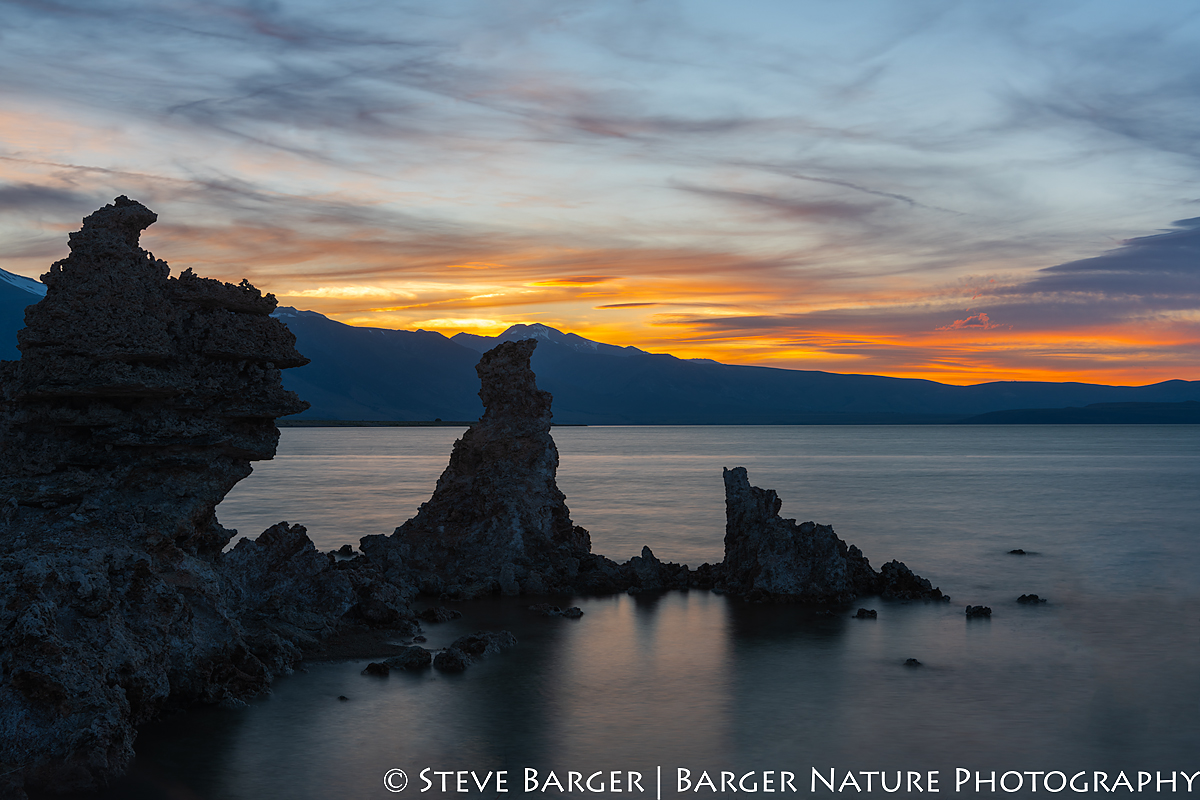 Sunrise at Mono Lake with Tufa Towers in the foreground.

This was captured at sunrise along the southern shore of Mono Lake in California on the eastern side of the Sierra Mountain range. Mono Lake is a closed desert lake meaning that streams flow into the lake but there are no outlets. Water escapes only by evaporation or as ground water. As a result, the water in Mono Lake is very saline; the high levels of salts accumulate in the lake raising the water’s pH levels.

So, Mono Lake is a saltwater lake. The calcium present in the underground spring water feeding the lake reacts with the carbonate-rich saltwater of the lake forming insoluble calcium carbonate or limestone deposits around these underground springs. Over time, these deposits grow forming towering columns of limestone reaching a height of 30 feet. These towering columns of calcium carbonate are called tufas, and are formed only underwater. They will become exposed when the water level of the lake is lowered.

Beginning in 1941, the city of Los Angeles Department of Water and Power (LADWP)began diverting the water from the streams feeding Mono Lake to supply its water demands. This resulted in a 45 foot drop in the water level of the lake and an increase in the salinity of the lake’s water exposing the tufa towers. In 1994 the LADWP agreed to allow the lake level to rise to healthy level.

The image posted shows these towering columns of calcium carbonate tufa towers, silhouetted against the mountains in the background and the colorful sky at sunrise. Since the tufa towers are fragile, care must be taken when in the area since they can be easily damaged. There are marked trails leading to the edge of the water that maintain a safe distance avoiding contact with the tufa towers.

I used a long shutter speed to give a smooth, calming eﬀect to the water. Since the camera used to capture this image has a very low signal-to-noise ratio, I knew that noise in the shadow areas would not be a problem if the scene was properly exposed. Since the camera used did not have the capability to frame stack images automatically, I would need to frame stack manually. When trying to smooth the motion of water using frame averaging, the best result is achieved when the exposure sequence is gapless or by averaging a large number of images. A gapless sequence can only happen when automatically capturing the frame average sequence. Due to the changing light levels during sunrise, I knew that there was insuﬃcient time to manually capture a large sequence of images manually. So, I elected to use a 6 stop neutral density filter. Reducing the light falling on the sensor by 6 stops, produced an exposure suﬃciently long enough to smooth out water motion and give the lake water the smooth, calm eﬀect you see in the image.