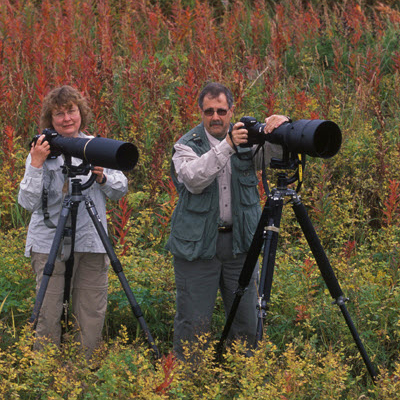 Steve has been photographing the natural world, with an emphasis on wildlife and landscapes, for over 25 years. He has travelled extensively, with an emphasis on the northern regions of America and Europe. Steve earned undergraduate and post graduate degrees in Electrical Engineering from the University of Cincinnati. After graduating, he worked in the private sector and taught several engineering courses at the University of Cincinnati. It was during this time that he became interested in photography. Vacations were always scheduled to coincide with prime photographic opportunities. Even though he has not had any formal photographic training at the college or university level, he has been fortunate to study under several nationally recognized nature photographers. These photographers were instrumental in his development both creatively and technically. It was during this time that he began to slowly build his portfolio of images. He recently retired from his engineering work and now focuses his attention full time on his photography, expanding his portfolio of rare images.

Steve has developed a real passion for capturing uncommon wildlife behavior on photographic media, requiring a great amount of patience and dedication. Several of the areas that he frequents for his photography require four to five days travel time, enduring heavy snow, and protecting both himself and his equipment from temperatures reaching minus 50 Fahrenheit.

Several of his images have been exhibited in galleries across the United States and Greece. He also has images on permanent display in several local galleries and has a studio at the Pendleton Art Center in Cincinnati. Steve has co-lead workshops in the western US and Alaska. Several of his images have been recognized by NANPA (North American Nature Photography Association) in their annual Showcase of Images and published in the PPA (Professional Photographers Association) Loan Collection.

In 2021, Steve submitted for images for judging in the PPA International Photographic Competition and was subsequently awarded a Gold Medal since two of the four images were judged into the PPA General Collection and the remaining two moved on to be selected for publication in the PPA Load Collection. Also, one of his loan collection images, “Safe”, earned him a spot on the PPA World Photographic Cup Team. The Team consists of 16 U. S. photographers who will represent the United States in the 2021 World Photographic Cup competing against other photographers from Europe, Asia, South America, Central America, and Australia.

I have had the privilege to travel to several exceptional and remote locations seeking to photograph the perfect landscape, eye-catching and entertaining animal behavior, or a unique moment in time. Many of these locations, most people will never visit. As a consequence, I am able to show in my photographs the natural world in a way that most people will not experience in the wild, for example watching the aurora borealis dancing in the sky above the snow covered mountains in the arctic, a grizzly bear running through the waters of a river in Alaska splashing as it tries to catch a salmon, or a mother polar lovingly attend to her three- month old cubs soon after exiting their birthing den. My inspiration springs from my love of the natural world and desire to aid in its preservation. Through my images, I hope to provide the viewer a personal connection with nature and a greater appreciation of, and respect for, the natural world.