Story Behind The Image “Supervised Play” 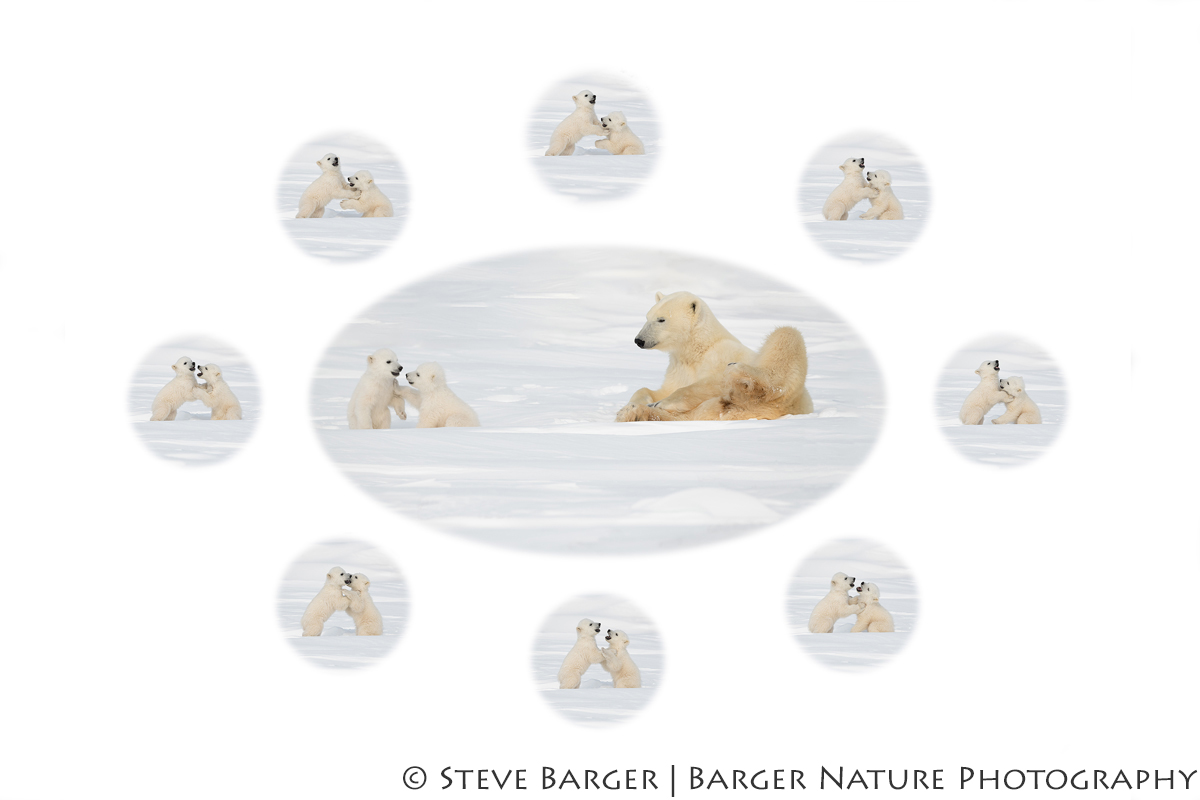 A sequence of images of young polar bear cubs playing on the tundra in Wapusk National Park, Manitoba, Canada while their mother watches intently.

These images of a mother polar bear with her two cubs playfully sparring while she watched intently, were captured this past winter in Wapusk National Park, Manitoba, Canada. I spent the first two weeks of March this year in the Canadian tundra with a small group of photographers. Our primary goal: photograph these awesome mammals in their natural environment. The cubs in these images are only a few months old, so they are extremely small in size.

Local guides are required to enter the Park. Travel is done using vehicles modified to negotiate the rough tundra terrain. Travel in these vehicles is very slow and bumpy, Typical speeds for these vehicles would max out at 10 miles per hour.

Early in the morning on my first full day in the Park, two of our guides spotted a polar bear family sleeping on the tundra. After a long, slow, and bumpy ride, which took over an hour, we arrived at the site early in the afternoon to find all three bears curled in a big ball, sleeping, and covered with snow. The sound of the tundra vehicles as they approach does not alarm them, since the mother is familiar with the sound and the cubs follow their mother’s actions.

Proceeding in a slow and methodical manner, I set up my camera, lens, and tripod maintaining the Park Services recommended viewing distance. For the next couple of hours, I patiently waited in the cold temperatures and blowing snow as the bears slept. Periodically, there would be a hint of activity when the mother would open her eyes and raise her head to make sure all was OK. She would then lower her head, close her eyes and continue resting, always aware of her surroundings. Several times, the cubs would wake up and move a bit, always maintaining physical contact with their mother.

Around three o’clock in the afternoon, all three finally woke-up and began to move. The cubs then proceeded to climb all over their mother pulling her fur, ears, and paws, while maintaining physical contact with her. After 30 to 40 minutes of this, the cubs then began playful sparring. At first, they would stay close to her, but after a short time began to move away but no farther than 15 to 20 feet oﬀ to her side. This is when these images were taken.

It is always a challenge how to depict motion in a single wall print. After thinking about it for awhile, I decided to make a montage using the images from the sequence. The image featured in the center would be the mother intently watching her cubs sparring close by. This image would then set the stage for the remaining images of the cubs sparring which would be placed around the center image. The spacing between the cubs and their mother was outside the field of view of my lens so I could not include the mother in these images.

After further thought, I decided to use the images of the cubs sparring, to make a sequence. Since the action occurred quickly, I was able to pick 10 images where the background remained constant, using these images for the time lapse sequence.