Story Behind The Image “Riding the Wind” 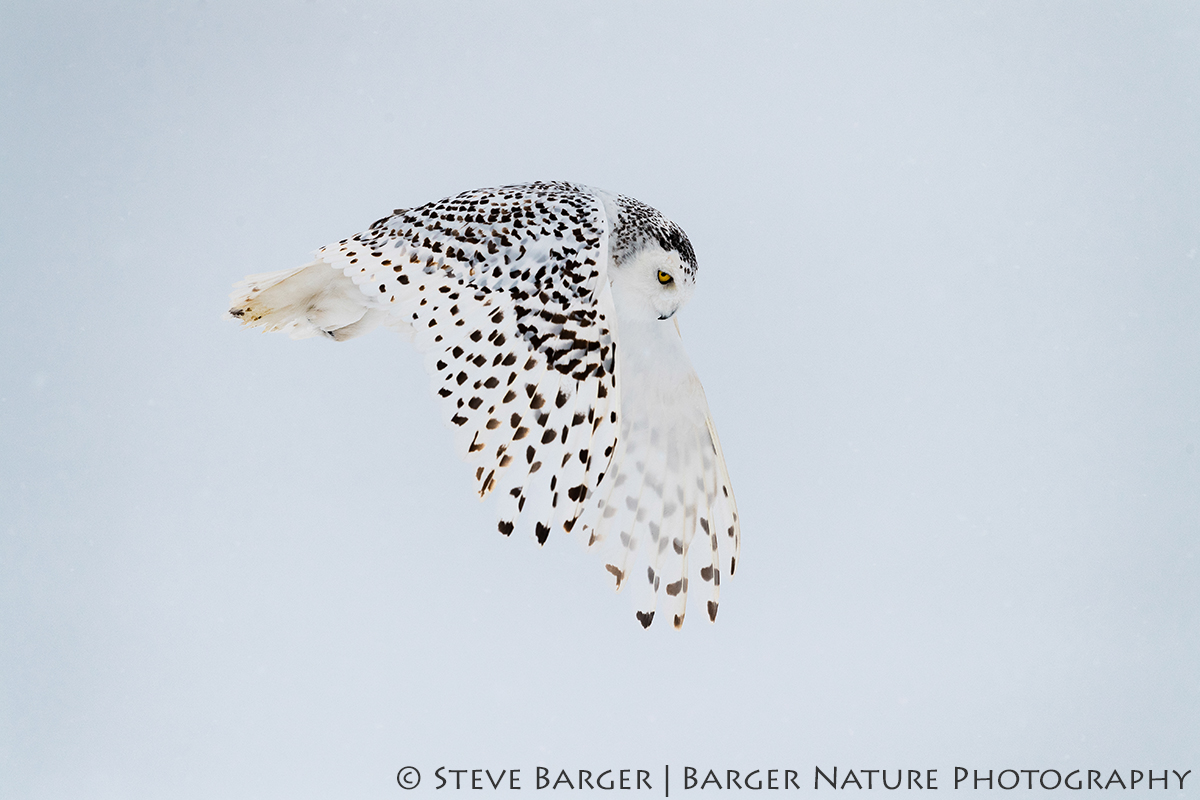 Snowy Owl hovering overhead in strong gusty winds. Its wings are in the full downward position.

This image of a snowy owl was taken a couple of years ago in northern Ontario, Canada. During the summer breeding season, the snowy owls live in the Arctic regions of North America and Eurasia. In winter some snowy owls migrate south, often into the United States. Snowy owls have been spotted here in southwestern Ohio.

Snowy owls can weigh as much as 6 pounds with a wing span of 4 feet. The adult males are pure white and the females are white with some dark feathers. To keep warm, they have a layer of down underneath many layers of feathers. They are extremely good judges of distance, have excellent hearing, and long black claws which aid their ability to hunt. Since their summer breeding grounds are above the Arctic Circle where there is 24 hours of daylight during this time of the year, snowy owls are not completely nocturnal. During winter they hunt during both the day and night depending on weather conditions and availability of their food source. They nest in the Arctic tundra and are attracted to open areas, which make it easier to photograph them.

The snowy owl’s migration habits during the winter months are dependent upon their food supply which consists mainly of lemmings and field mice. If their source of food is plentiful, there will be a sudden boom in the population of snowy owls that migrate south. This sudden boom is referred to as an irruption.

Even though the year the image in this post was taken would not be considered an irruption year, there was still a healthy population of females. It was easy to spot a snowy owl in a field perched on a fence post or on the ground, and then wait for the owl to take oﬀ. Scouting the area ahead of time was necessary to find the locations where the owls were frequently spotted. Since these locations were on private land and a quarter to half mile from the road, it would be necessary to hike a short distance to reach a good photographic distance without disturbing the owl. This would require gaining permission to access the private land from the owner. Scouting to find these locations and gaining access permission was done a day or two in advance.

The image seen in this post was taken on a day when weather conditions were extreme with freezing rain and gusting winds. The back of my down jacket, which was facing the wind, was covered in ice as were my camera and lens. The gusting wind made it impossible to place a rain cover over my equipment and continue to photograph. Most of the images were take hand-holding the camera and lens since it is easier to track a snowy owl in flight hand-holding the equipment rather than mounting on a tripod. Just as with airplanes, ice buildup on the wings of the owls spoils the flow of air over their wings making it diﬃcult to fly. Only during brief periods when the freezing rain stopped would they try and it was obvious that it was challenging for them. They would stay in the air for only a few minutes not venturing far from their perch.

As is often the case, bad weather can produce great photographic opportunities. Due to the freezing rain and gusting wind, the owl’s ground speed was greatly reduced. This made it easier to concentrate on the position of their wings to produce some nice flight shots. The owl in this photograph was flying overhead close enough to me to obtain a frame filling image hand-holding my telephoto lens. I like the simplicity of this high-key image made possible by the bad weather co so I titled the image “Riding the Wind”.