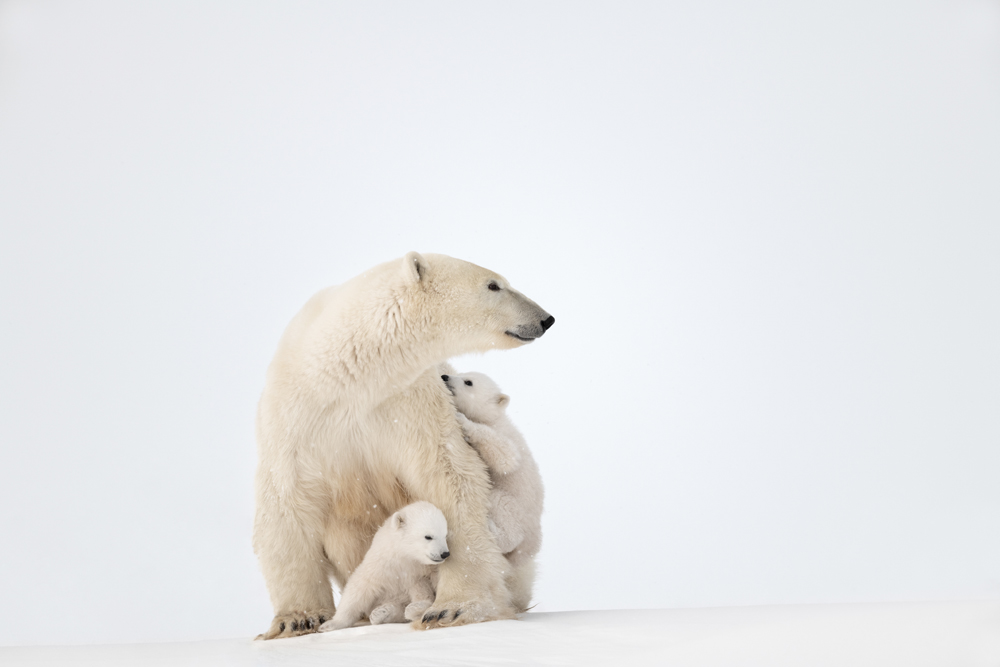 Two cubs-of-the-year protected by their mother; one climbing on its mothers back while the other watches in Wapusk National Park near Churchill, Manitoba, Canada

I just received notification that two of my images captured this year in Wapusk National Park located in Manitoba, Canada placed in the top 100 of the 2019 NANPA Showcase Competition. As I have previously written about Wapusk, most of you know that Wapusk is a denning site for polar bears. Pregnant females arrive in October to construct their birthing dens. In mid-February to mid-March, the females exit their dens with their newborn cubs.

The two images of mine that placed were titled “Safe” and “Under Foot”. Both images were taken this year in March. Receiving recognition for these images was particularly satisfying due to the significant challenges that needed to be overcome.

Even though there are normally several active dens in close proximity to the backcountry lodge, it is not easy to spot a mother polar bear with her newborn cubs. Since Wapusk is over 2.8 million acres in size, and access to the area is solely by tundra vehicle ( there are no roads in the park ), you are limited to traveling only a few miles from the lodge. During normal years, it is possible to access the den areas by tundra vehicle. Mother polar bears can be spotted as they exit the birthing den with their cubs. The mothers are accustom to seeing tundra vehicles and photographers so they pretty much ignore their presence and go about their normal routine as long as the vehicles and photographers maintain a 100 yard separation.

Since caribou and wolves occupied the denning area this year, the bears relocated their dens. Unable to travel by tundra vehicle to their new denning area, we were forced to wait and hope that the bears came to us. Luckily, there were three times over the two weeks that I was in Wapusk, that we had the opportunity to photograph a mother with her cubs.

The first family appeared in early afternoon. The light was diffuse by the high overcast sky, resulting in a desirable low scene contrast. The bears were located in a portion of the tundra with minimal vegetation and clean snow. The trick is to either position yourself so that the bears are in an area with clean foreground and background or wait until they moved into a clean area. Again, these bears are accustomed to seeing photographers on the tundra, so quiet and slow movements that do not close the distance separating the bears and humans will not alarm the bears and their cubs. Both images that placed in the competition were photographed during this afternoon.

Several days later, we encountered a second polar bear family. It was fun watching the cubs play, but the light and vegetation in the scene did not produce images of the quality of the first encounter.

The third family was spotted in the afternoon of the last day. Conditions were similar to the first family except the action was not as good. The mother with her two cubs spent most the the afternoon sleeping. I suspect they were tired from their long trek earlier in the day.

I will post the second image, “Under Foot”, next week.