Story Behind The Image “Fixated”

In September, I was fortunate to spend a week in British Columbia, Canada, photographing grizzly bears along the Chilko River. This was my second trip to the area to photograph grizzly bears; my first trip was in 2018 with Suzanne. This year she did not travel with me, staying back home to fill other commitments.

This year, like last year, my trip was very productive. There were a large number of salmon swimming up-river to spawn, so there were several bears fishing for salmon. The photography is done from a specially designed boat and our guides maintain a safe distance from the bears so as not to stress them. Also, there is a twenty minute limit on the time we would spend photographing a single bear or mother with cubs, again to avoid stressing the bears. The bears were very comfortable with our presence allowing us to observe and photograph their normal behavior.

This year there were two mothers each with three cubs. These cubs were cubs-of-the-year, born earlier in the spring. The cubs still had a high amount of energy and were extremely active, great to watch but challenging to photograph. Their behavior can be very chaotic and it was diﬃcult at times to make a visually interesting photograph. In my photography, I am looking for harmony and simplicity in the image. For this image it would mean all three bears doing the same thing at the same time, for example looking, standing, eating, or playing in such a way that they create a visually interesting image. This also means that the faces and particularly the eyes of each subject are visible in the frame with no distracting mergers. This can be a very diﬃcult and demanding task, to capture an image that has harmony. In this image the level of diﬃculty increases exponentially as the number of bears and their level of activity level increases. It is imperative that the photographer pay constant attention to the subjects since the moment that everything falls into place will be short and quick. The key is preparation and have an understanding of the biology of the subject so that their behavior can be anticipated. 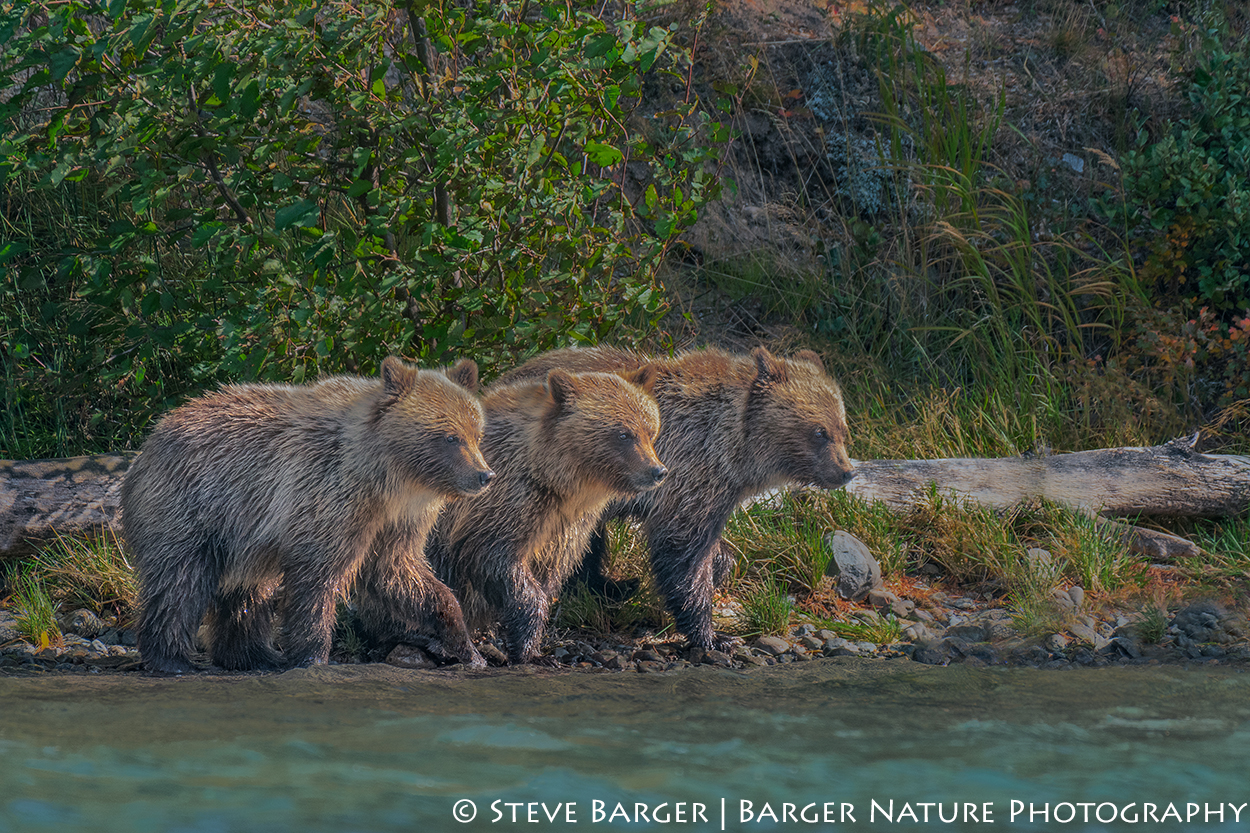 The image featured in this post occurred when the cubs’ mother left them on the shore to fish for salmon. During their first year, the cubs will stay close to their mother for protection. The cubs also learn by watching their mom and imitating her actions. In this it appears that the cubs were patiently watching their mother from the shore while she fished in river. Actually, they paused on the shoreline only momentarily before entering the river and swimming out to her hoping that she would share her catch with them. The pose you see in this image shows all three cubs standing side-by-side looking in the same direction fixated on their mother fishing in the river. The pose you see in this image only lasted a second, before one of the bears moved in front of the other two. Attention, preparation, and knowledge of bear behavior paid oﬀ and resulted in this image.