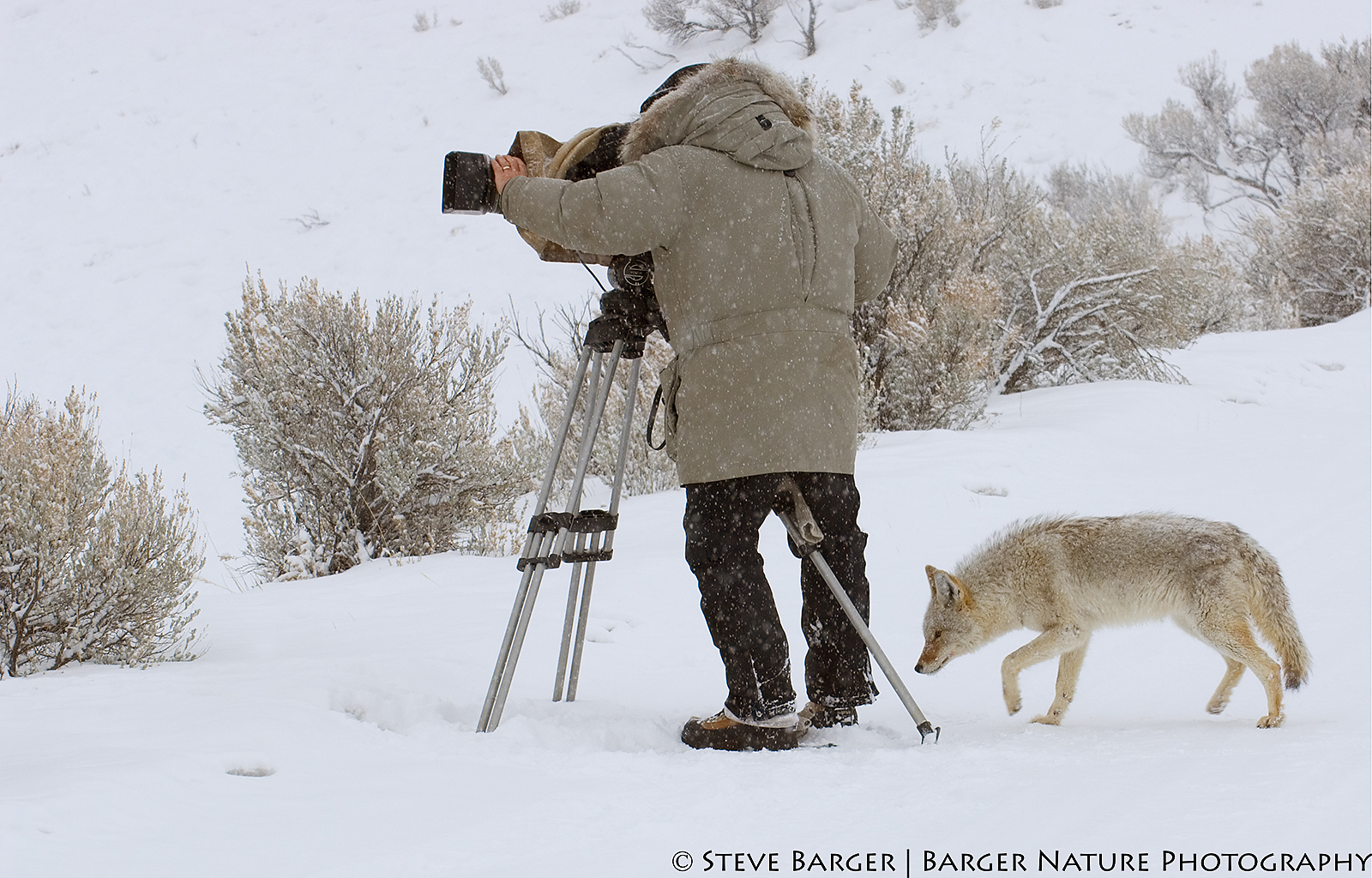 Story Behind the Image “Sneak Attack”

Here is an image I recently ran across while doing some much needed file editing. This image was captured over 20 years ago while visiting Yellowstone National Park in the Winter. The equipment used to capture this image was a Nikon F3 camera, Nikon 500mm f/4 P ED IF lens and Fuji Provia 100 film pushed processed to ISO 200 gaining an additional stop of shutter speed. Digital cameras and autofocus lenses were not yet a reality.

In winter all roads in Yellowstone National Park are closed except one, the road between Gardner and Cook City. This road remains open during the winter providing the only access to Cook City. When the snow is deep, wildlife can often be spotted near the road. This makes for wonderful opportunities to photograph wildlife using pullouts along the road as they forage for food.

On this particular trip, I had been working the road between Gardner and Cooke City for several days. There were daily opportunities to photograph bison, elk, coyote, red fox, bald eagles, pronghorn, and big horn sheep along the road between Gardner and Cooke City. Whenever I would set up on my subject there would be one videographer that would move in front of me and set up his rig blocking my view. No matter what I would do, I was unable to get him to move his position. Sometimes, I was able to move my position while other times my view would be blocked and the only option would be to move on and scout for other opportunities. This happened so many times that it became very irritating. Since he was from outside the United States, I believe that there was, among other things, a language issue.

Fast forward to my last full day in the park. I was working a pack of coyotes from a pullout along the road on the Gardner side of Lamar Valley when the videographer arrives, and in typical fashion sets up between me and the coyote pack, blocking my view. In this particular instance I was unable to move my position since sage brush would block my view. Therefore, I decided to sit back and watch. After several minutes, I noticed one of the coyotes break away from the pack and move across the road approximately 40 yards away from the unsuspecting videographer. It became obvious that the coyote was curious and wanted to check out the videographer. I was in a perfect spot to watch this unfold. The videographer was busy filming the pack and unaware of the lone coyote approaching from behind. Following the coyote’s approach, I patiently waited until he was directly behind the videographer, who was still unaware of the coyote’s close presence, and took this image which I titled “Sneak Attack”. Shortly after capturing this image, the coyote left satisfied that the videographer was harmless. This humor in this image more than made up for all the earlier lost images opportunities.