Story Behind the Image “Sentinel” 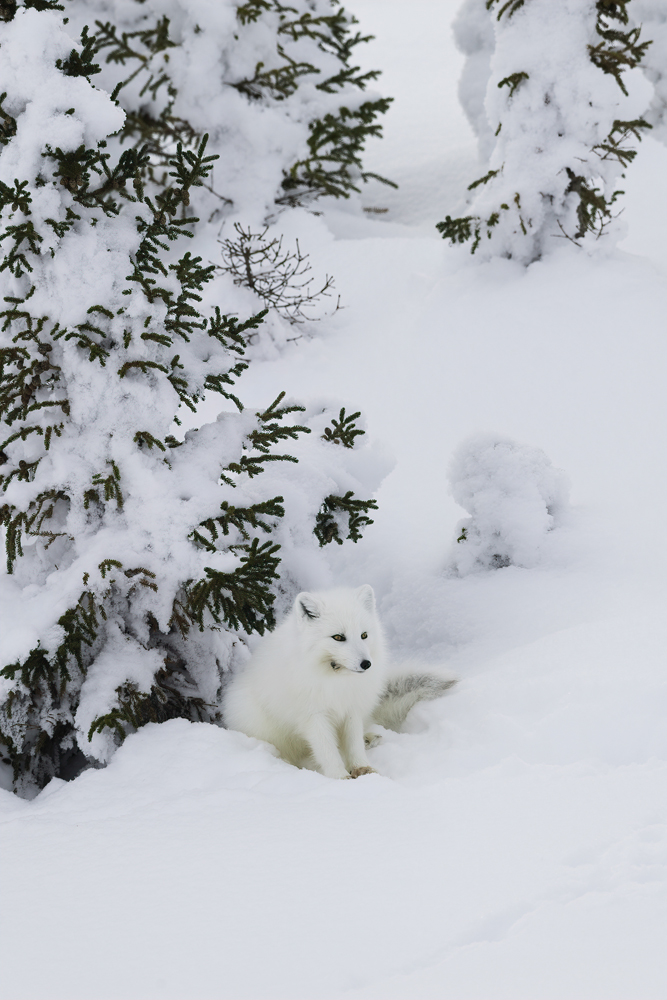 I ran across this arctic fox image while doing some much needed image cataloging and thought that it would make a good post. This image is different from the wildlife images that I normally post in that the subject is loosely framed in the image. As often is the case when photographing subjects in the wild, the foreground and background can create a distraction. When this is the case there are two alternatives. Either do not take the shot or compose such that the foreground and background no longer create a distraction. One technique that has proven successful for me is to use a long telephoto lens and wide aperture to render these distractive elements out of focus in the image. This technique has worked well for me since this is the way I see things in the field. I believe that the intimate perspective resulting from using this technique best showcases the animal’s behavior. It is also important to note that under no circumstances will I approach a subject closer than the published minimum distance defined for the area where I am shooting nor will I do anything to stress the animal.

This arctic fox was feasting on a leg of caribou on the tundra this spring in Wapusk National Park, Manitoba, Canada near the western shores of the Hudson Bay. He was located deep in a patch of snow-covered spruce trees. His position was far in the distance and deep in the spruce forest so binoculars were needed to spot him. Since arctic foxes are small animals, I knew that, even using my 800mm lens, a full frame image of this guy would not be possible. A slow approach would be required to get in position to get a shot of him. Even though the fox was focused on his tasty morsel of caribou meat and was not threatened by my presence, I knew I would not be able to get very close to him. A slow and methodical approach would be necessary; moving a few steps while he was eating, stop and carefully position myself behind my camera, tripod, and lens. I would then watch him through the viewfinder of my camera so when he would take a break from eating and look up, I could take a couple of shots without any body movement. When he would return to eating, I would continue my approach quietly taking a few more steps closer and stop. I continued this slow approach for the next 30 minutes, at which point I knew that it would not be wise to approach him any further. The fox undoubtedly was aware of my presence, but due to my careful approach, was relaxed and did not feel threatened. So I stopped and firmly set my tripod in the snow, and composed my shot. There were still a few spruce branches in the image creating a distraction, but the distractions were minimal and the fox was comfortable with my presence. I decided to take a few images. During this time, the fox would eat, look up, go back to eating, and move from one side of the caribou leg to the other as he devoured the meat on the leg. After five minutes of shooting, the fox left the caribou leg in the trees, and moved out of the trees and sat down in front of the snow covered trees and directly in front of me, completely unobstructed. I guess he wanted to take a temporary break from eating but was not about to abandon his dinner. What luck for me! With the snow covered spruce trees behind him and no branches in front, he presented me with a nice clean shot. One of the images I took with him in front of the trees is posted here. He sat still for several minutes, then moved back in the trees, picked up the caribou leg, and proceeded to walk in front of my position carrying the leg in his mouth. This also was very nice.

Patience and knowledge of animal behavior allowed me to get close enough to this fox without disturbing his behavior. I really like this image as a wildlife landscape, nicely placing the fox in his environment.