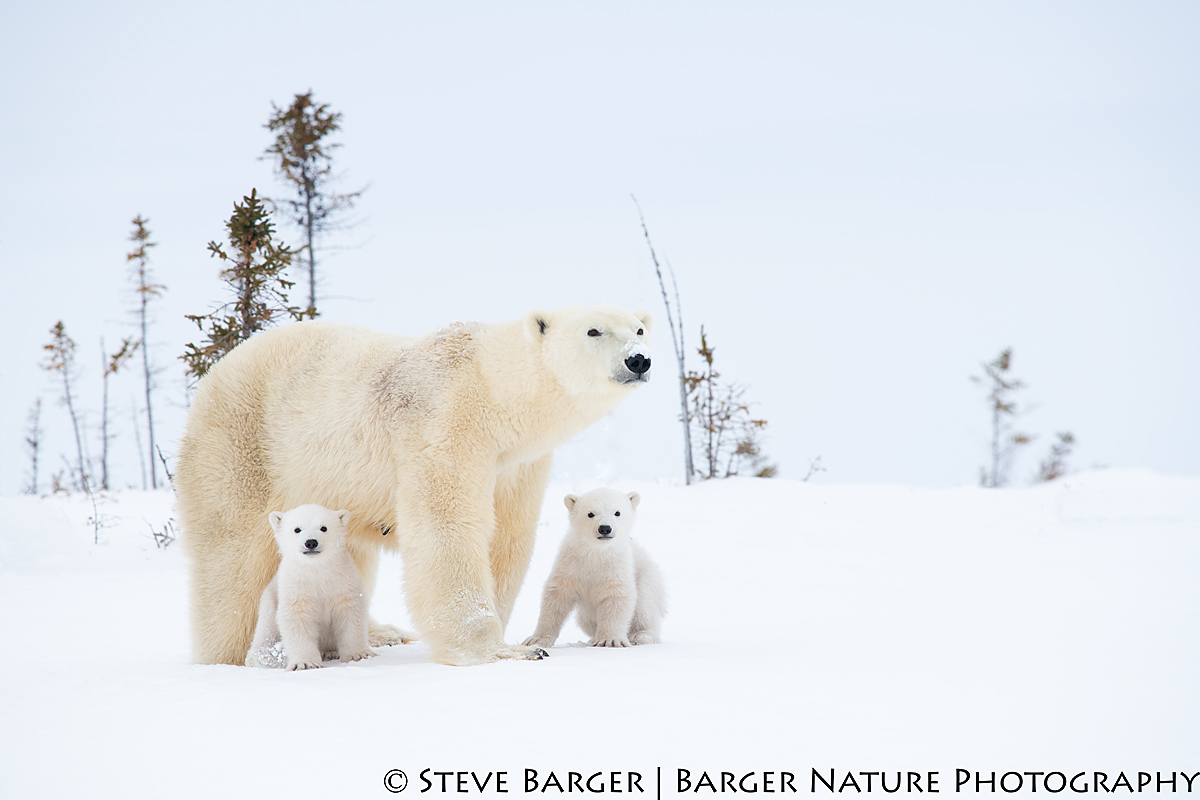 Polar Bear mother with her two month old cubs curiously surveying the area as they prepare to make the trek from Wapusk National Park to Hudson Bay.

It is three o’clock in the afternoon, I have been waiting four hours for a polar bear with her cubs to emerge from their den. I have three more days left until they close the backcountry lodge where I have been staying the past two weeks. The lodge that has been home these two weeks is called Watchee, a Cree word for forested ridge, located just outside Wapusk National Park located 30 miles south of Churchill, Manitoba in Canada. This will be my fifth visit to Wapusk, primarily to photograph polar bear mothers with their newborn cubs.

This type of photography requires an extreme amount of patience. Days can go by waiting for an opportunity to photograph polar bear mothers and their newborn cubs. This year has been unusual in that we have photographic opportunities almost every day. One day we stayed in the lodge and didn’t go out due to wind chill temperatures around -50 degrees C. It would not be unusual to spend two weeks here and have one or two sightings during the entire two weeks. This year has been, without question, the best year I have had for polar bear photography.

This polar bear mother with her two cubs was photographed after leaving her den and preparing to make the 30 mile trek to Hudson Bay with her three month old cubs in tow. I had been photographing them for three hours as she rested on the snow with her two cubs nestled against her. It was approximately 2:00 in the afternoon when they began to move. She sat up and stretched and watched intently as the cubs played near her side. When playtime was over, she nursed the cubs directly in front of us. All during this time, the mother knew we were watching, but showed no signs of concern or stress. This is mainly due to the park regulations which require that everyone maintain a 100 yard distance from the bears and keep talking, movement, and noise to a minimum. This image was captured just as she was preparing to leave the area. She stood facing us with her two cubs on either side interested to see what we were doing. I hope you enjoy the image. More images to follow.