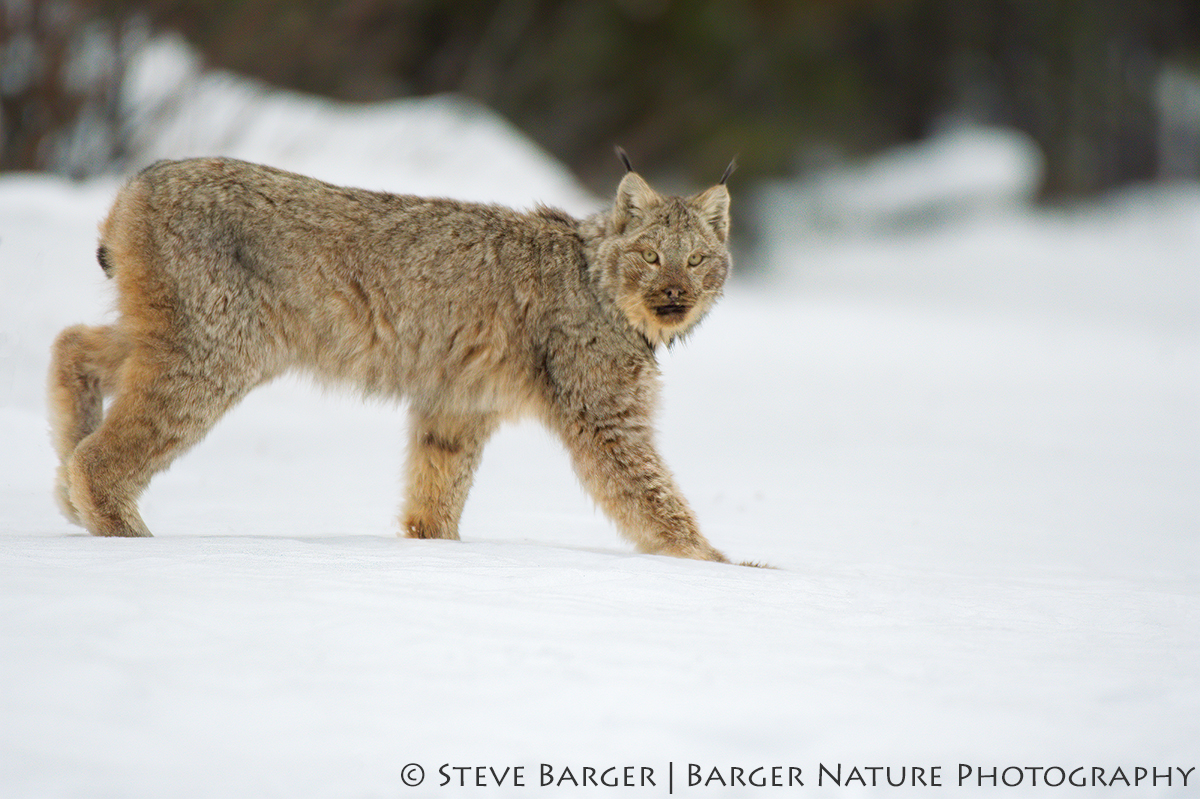 Story Behind the Image “Gaze”

This past February, I traveled to British Columbia primarily to photograph wolves. The wolves are active during the winter and wolves photographed on snow can create, in my opinion, a very striking image. Unfortunately, unseasonable temperatures and a heavy snowfall prior to my arrival, forced the local wolf population to temporarily relocate to another area. Since wolves can cover a territory of 50 square miles, given the conditions, it would be impossible to locate the wolf packs during my short visit. During the week I did hear a pack howling and barking in the distance. I had one wolf sighting but in a position where I was unable to take a meaningful image.

I was returning by snowmobile one afternoon after an unsuccessful day scouting for wolves when I noticed a lynx ahead sitting on the side of the trail. A good friend of mine was traveling with me. When traveling in the backcountry in the winter it is smart to travel with at least one other person in case of mechanical failures or injuries. We stopped approximately 150 yards away from his position, and watched as he continued to sit and eat. He was obviously not concerned with our presence due to our position relative to his. Finally, the lynx tired of eating, stood and walked into the forest next to the trail. We then moved on down the trail past where he entered the trees and stopped approximately 150 yards on the other side of his entry into the forest. I then proceeded to walk back up the trail and laid down in the snow approximately 75 feet from where he entered the forest. I knew it was a long shot, but I hoped if I remained perfectly still and did not make any noises, he might return. Sure enough, after patiently waiting 15 minutes or so, he appeared at the edge of the forest.

I slowly raised my camera and lens to my eye and began to take a few photographs. During this time, he just stood motionless in front of the forest watching. His position was such that if he sensed danger, he could quickly move into the forest using the snowdrift in front of him as cover.

After maybe five minutes, apparently realizing that I posed no threat to him, he proceeded to slowly walk out to the snowmobile trail and up the trail away from me. During this time, I held my position knowing that he would maintain a safe distance from me outside his “circle of fear”. Enter into an animal’s “circle of fear” and they will either fight or take flight.

During this time, I avoided making any sudden movements or strange noises. He walked slowly but with purpose. When he reached the snowmobile trail, he turned and walked up the trail. It was very clear to me that he did not feel threaten by my presence, since his behavior was business as usual.

As is often the case when photographing in the wild, opportunities to photograph the primary subject may not materialize. Avoid getting discouraged, keep an open mind and constantly be aware of your surroundings, and something worth photographing will appear. This trip was no exception. Besides, if this were easy, everyone would be doing it.