Story Behind The Image “Ablaze” 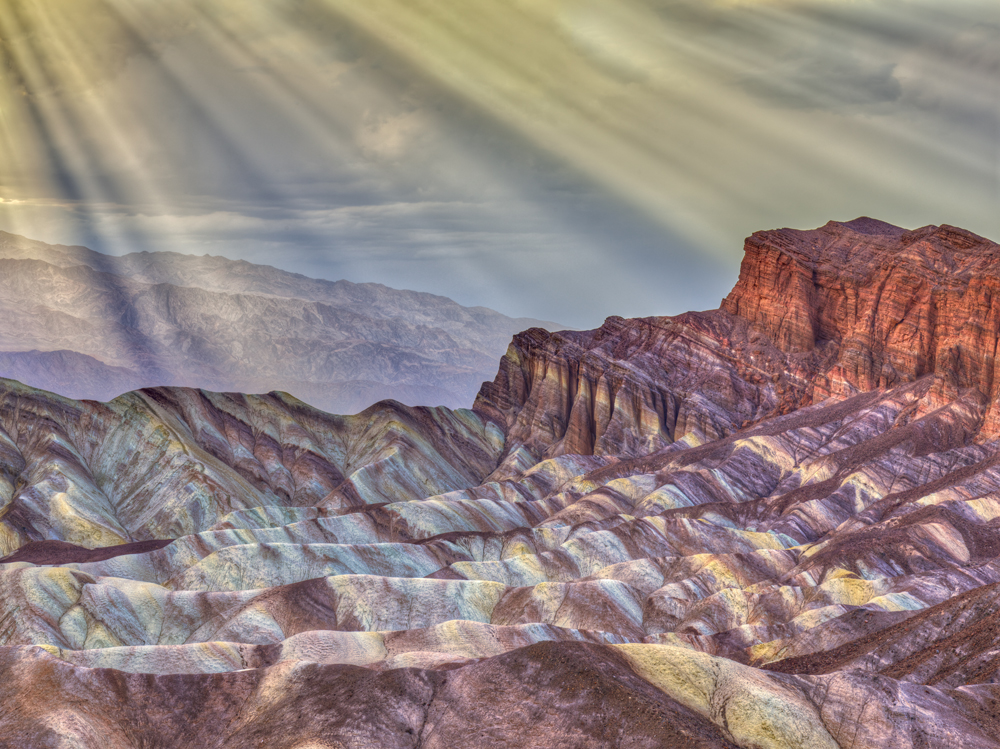 A memory of nature’s unique beauty. Sun rays shining over the landscape at Zabriskie Point

This image, titled “Ablaze” was captured in Death Valley National Park in California a short 2 hour drive from Las Vegas. The Park straddles the California – Nevada border east of the Sierra Nevada Mountains. Badwater Basin located inside the Park, is 282 feet below sea level. Solar heating resulting from the soil, rock, sand, and sparse vegetation which makeup the landscape, contributes to the high summer temperatures. The walls of the valley which run north-south perpendicular the east-west prevailing winds trap the hot air near the surface so that it is recirculated back to the ground as it rises.

During my visit temperatures reached 115 degrees F in the afternoon. Since a good part of my photography is located in the high arctic where temperatures drop to negative 50 deg F, it took some time for me to adjust to the extreme heat. I would photograph in the early morning and late afternoon into the evening. During mid-day I would either scout the area for potential photographic locations or stay in my motel room and process images. When outside I took steps to provide plenty of protection from the sun to avoid sunburn including sun block, long sleeve shirts, and a wide brim hat. I drank plenty of water to remain hydrated. The extremely high temperature is also hard on camera equipment causing the electronic components inside the camera to become very hot resulting in the presence of noise in images. I typically used an ISO setting of 50, base ISO for the camera I was using, to minimize the eﬀects of temperature- induced noise. My shutter speed was typically around 1/100 second.

Death Valley is a very large national park with stunning scenery perfect for landscape photography. From the patterns on the surface Badwater Salt Flats, the variation of colors in the rocks at Artist’s Palette, to the erosion in the landscape at Zabriskie Point there are plenty of photographic subjects. My favorite location was Zabriskie Point.

Zabriskie Point has a badlands appearance due to erosion in the landscape. Millions of years ago the area was covered by water. During this time saline mud, gravel and ash-fall sediment formed at the bottom of the lake. As the mountains in the region began to rise, the water evaporated, resulting in a dry lake and the erosion seen today in the unusual landscape. Dark lava can also be seen in the landscape at Zabriskie Point due to volcanic eruptions that occurred after the water evaporated.

The image posted here is an excellent example of the appearance of the landscape at Zabriskie Point. The variation of color and the layers illustrate the formation of this area discussed in the last paragraph. This image was taken later in the afternoon on a partly cloudy day. I had been photographing the shadows and patterns on the landscape. After about an hour and a half of photography, the clouds became very dense blocking the sun and the light was uninteresting.

Since I was getting hot, I decided to pack up and move on. I had all my gear packed and was picking up my tripod when I took one last look and noticed a small opening in the clouds. The sun was positioned such that sun beams were radiating from the opening in the clouds down to the ground below resulting in the dramatic eﬀect see in this image. Knowing that this would only last for a couple of minutes, I quickly unpacked and setup my camera and lens, and was fortunate to capture a few images. The image posted here is my favorite. When capturing this image, I noticed the sky ablaze with a yellow tint probably due to the angle of the sun and particles present in the air. I really liked this eﬀect along with the sun rays leading the viewer into the frame to the unique landscape below.