Night sky and star trail images are typically taken in locations where there is minimal light pollution prohibiting the stars from appearing bright and well defined in the night sky. Unfortunately, the majority of locations east of the Mississippi are classified as non-dark sky locations since the night sky is polluted with ambient light produced by cities and small towns. Also, during the full moon, there can be sufficient ambient light produced by the moon to lighten the night sky to the point where the stars appear dim or non-existent in the sky. Technically, the increased ambient light produced by the city lights or the moon extends the dynamic range of the scene beyond the capability of the camera. Dynamic range is defined as the range of tones from the brightest to the darkest in a scene. The goal of the photographer is to capture detail in both the bright and dark areas. If the dynamic range of the scene is smaller than the dynamic range the camera, detail will be present in the final image in the lightest and darkest areas, providing the proper exposure is used. Scenes with a very wide dynamic range are particularly challenging. One technique used in these situations is called HDR (High Dynamic Range) photography. The process requires that several images be taken of the same scene varying the exposure of each image. The exposures are then blended during post-processing so that detail is preserved in the light and dark areas when creating the final composite image. This process works well when the scene photographed is static, but is impractical to use when there is motion in the photograph. In a star trail image, the stars appear to move in the sky due to the earth’s rotation. Therefore, it would not be practical to employ the HDR technique for star trail photography in areas where the light pollution is heavy.

The process used is a modification of the HDR technique described above. Adjustments are made during the in-camera capture of the images used for the final composite and during post-processing the images. 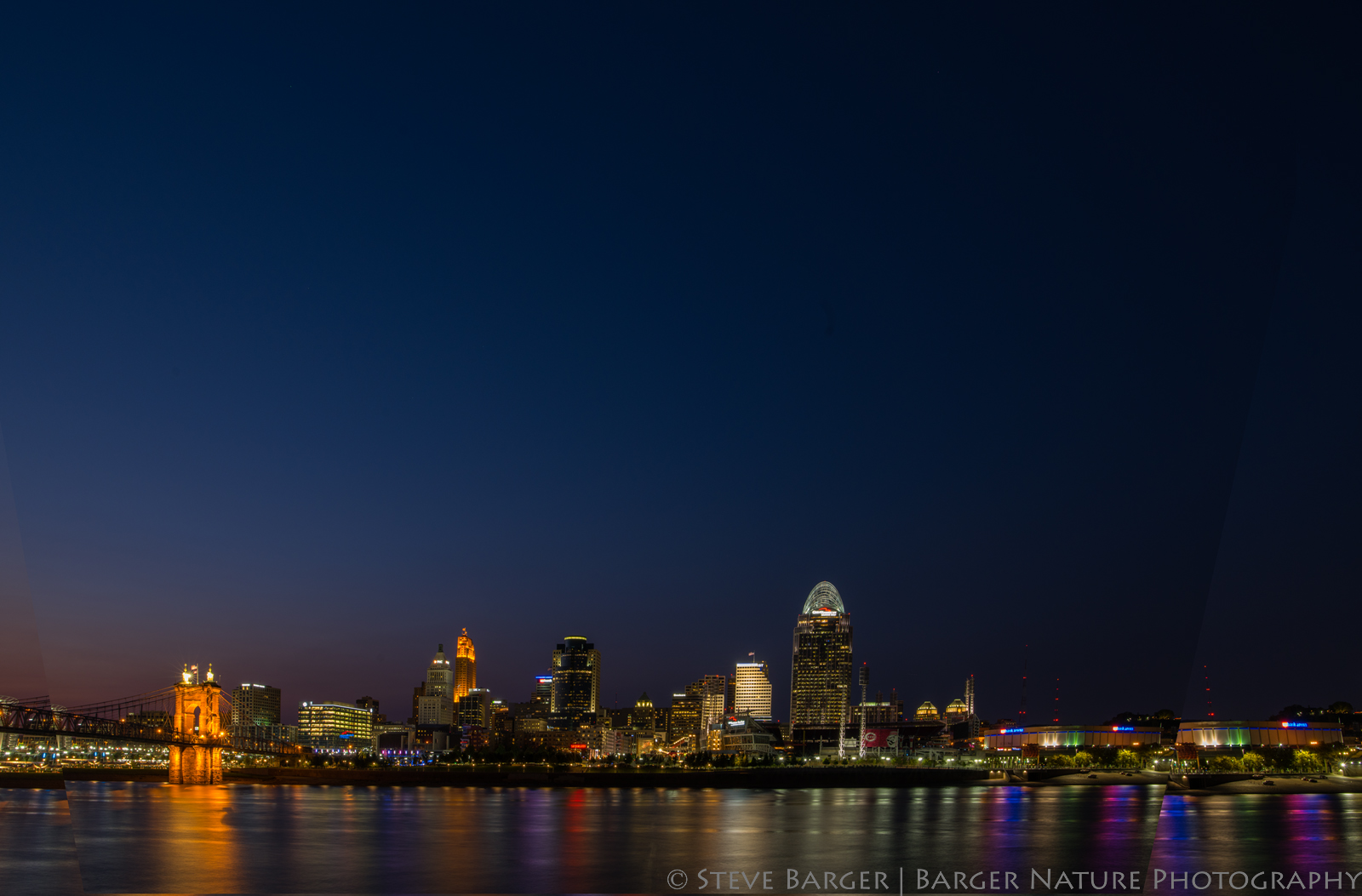 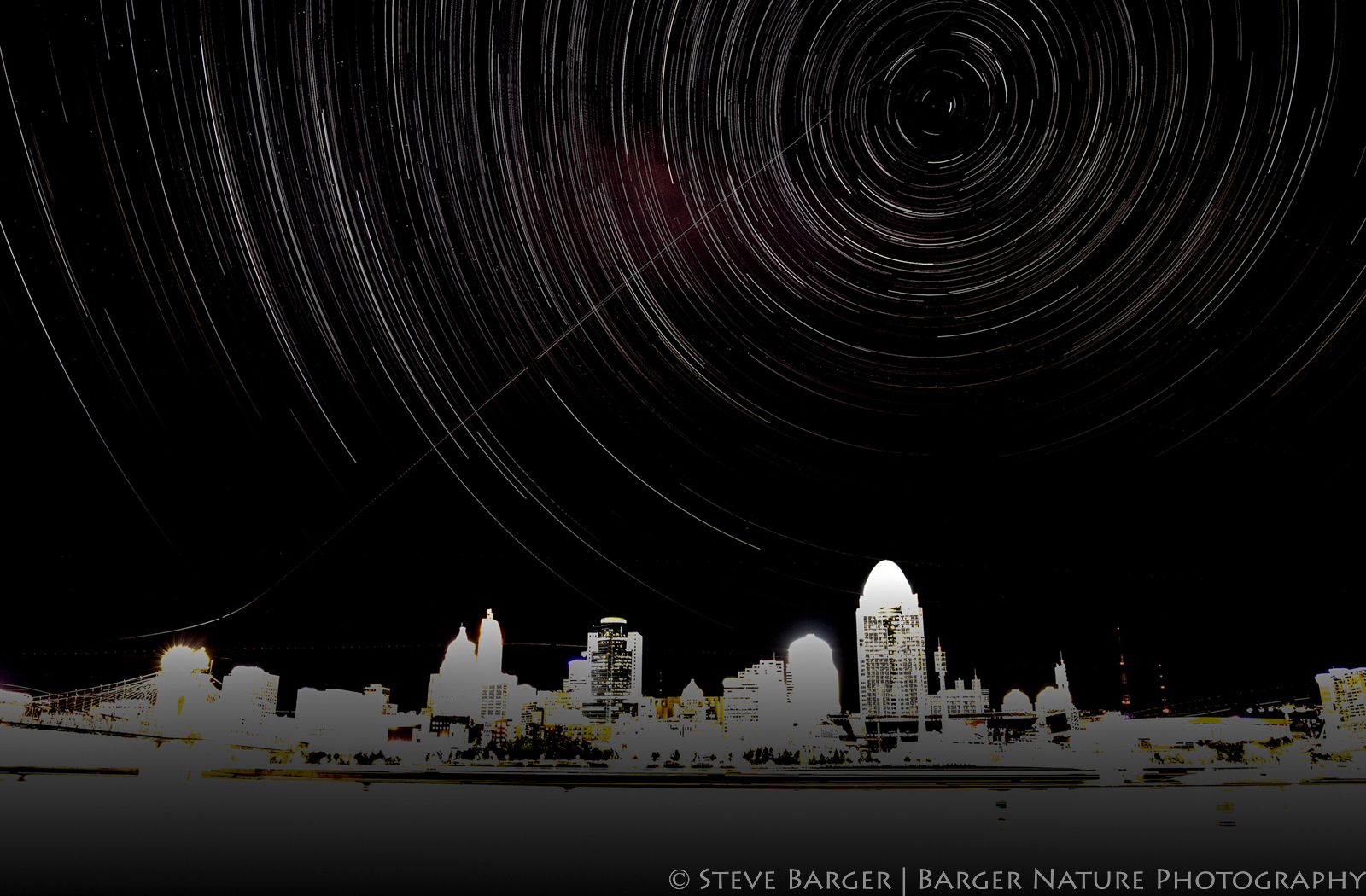 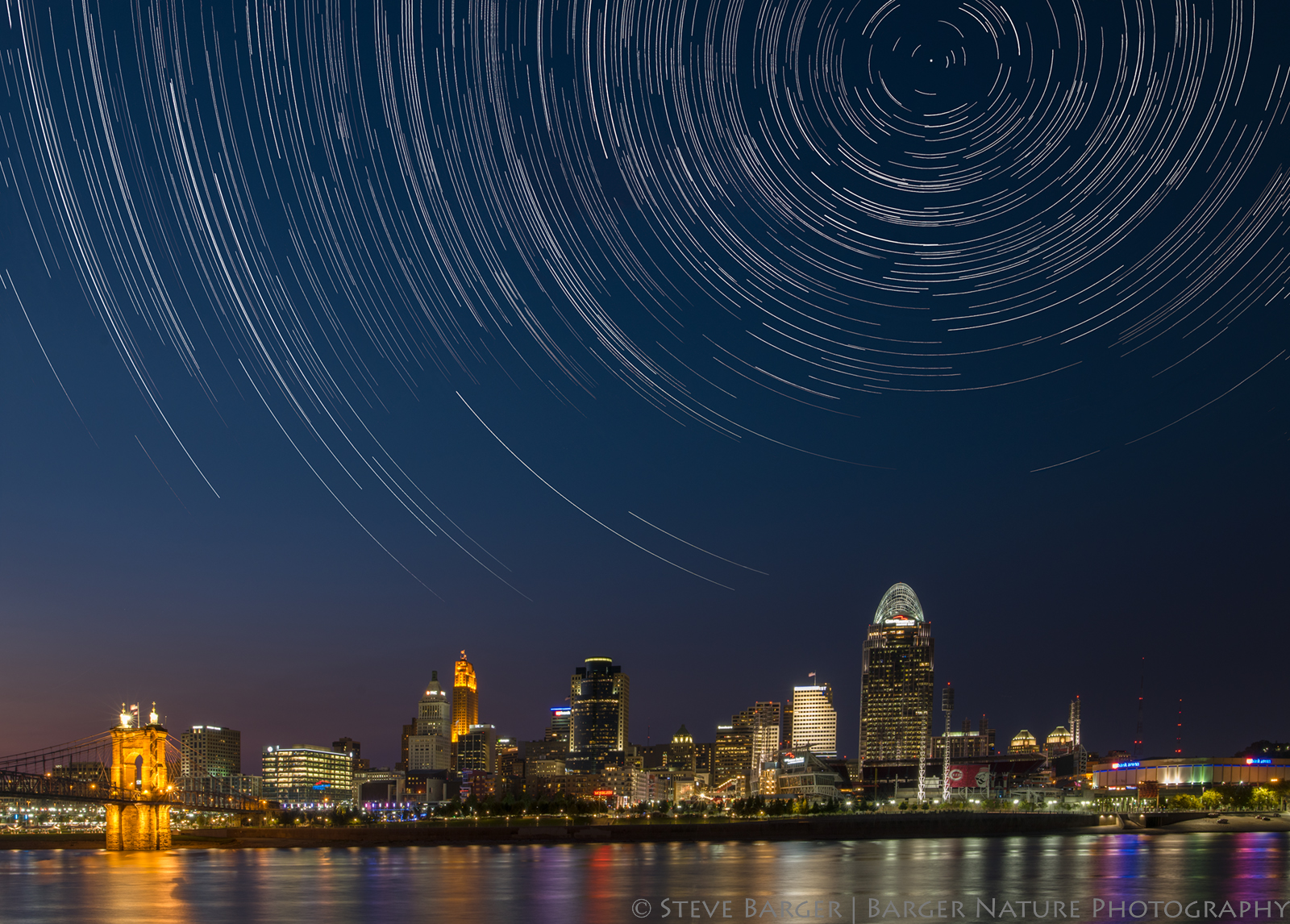 Another source of light pollution is the moon. Unlike the man-made light produced by densely populated areas such cities and towns, the moon’s light intensity will vary with the changing phases. Light from the moon can have an impact on night photography during moon phases from the first quarter through full moon to the third quarter, during which the light from the moon should be accounted for when photographing star trails. Below is an example of a star trail composite image taken in Monument Valley during a full moon. Monument Valley, due to its location, is considered a dark sky site. During the full moon, light from the moon served to light the scene. This resulted in lighting the detail in the foreground, but at the same time lighting the sky. To make the star trails more visible in the sky, the above technique was employed. A base image was exposed first; the tripod, camera, and lens remained stationary and the star trail sequence was recorded later. The difference in this example was that I waited a longer period of time before beginning the star trail sequence. This was to allow the moon to rise sufficiently high in the sky so that it was outside the frame of the image before beginning the star trail sequence. I followed the procedure outlined above to process the files. Since the dynamic range of this image is not as wide as the skyline image, not as many adjustments were required 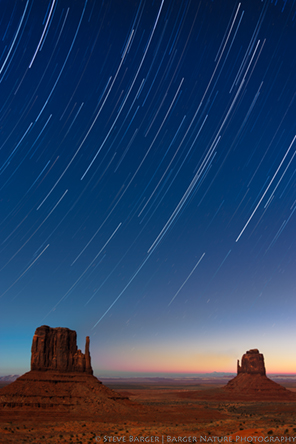 The exposures used to capture the base image and the star trail composite images will depend on a number of factors such as ambient temperature, clarity of the sky (presence of haze), camera and lens used, and the level of light pollution present. Determining the proper exposure will most probably require experimentation. It might be possible to use a split neutral density filter to reduce the variation of tones within the range of capture for the camera. I did not pursue this option due to the wide dynamic range of the scene. I felt the use of a split neutral density filter would result in an un-natural transition in the sky.