Recently, I found myself planning a week long trip to the Great Smoky Mountains National Park. Since on this trip I wanted to primarily work with my medium format digital equipment, my photographic subjects would mainly be landscapes. I would still pack a 35mm body and telephoto lens in case we encountered black bears. From research, and previous visits to the area, I knew to expect a wide variety of weather. The weather can rapidly change from cloudy skies with rain to sunny skies with cumulous clouds to fog. The challenge for this trip would be to record theses changing conditions in a meaningful and interesting way, photographically. After some thought, I felt the best way to accomplish this would be to select a scene from a particular location in the park and photograph the scene at about the same time every day. Photographers will often photograph the same scene in the spring, summer, fall and winter, so why not apply the same approach to a dramatically compressed time frame.

The place I had in mind would work best at sunset providing color, diversity, and leveraging the environment of the Smoky Mountains. I wanted more than a series of sunset pictures; I wanted several images with different subject matter taken at or near sunset.

There are two environmental factors at work in the Smoky Mountains affecting the environment and photography, one man-made and the other natural. The name for the area comes from the fog that forms naturally in the valleys of the area. The volatile organic compounds released into the atmosphere by the local vegetation produce this fog. These compounds form the vapors that produce the fog. Air pollution, which blankets the area, appears as a white haze reducing visibility. You will see the presence of both these environmental factors in the images shown here.

The first evening produced the most colorful sunset. The layering of clouds was positioned high enough in the sky to allow for a cloudless layer of haze directly above the horizon. When the sun broke through the layer of clouds, it appeared as a big yellow ball as it touched the horizon. Also, the cloud layer directly above reflected light from the sun. So there was a nice contrast between the cool tones of the foreground and the warm tones of the sky. 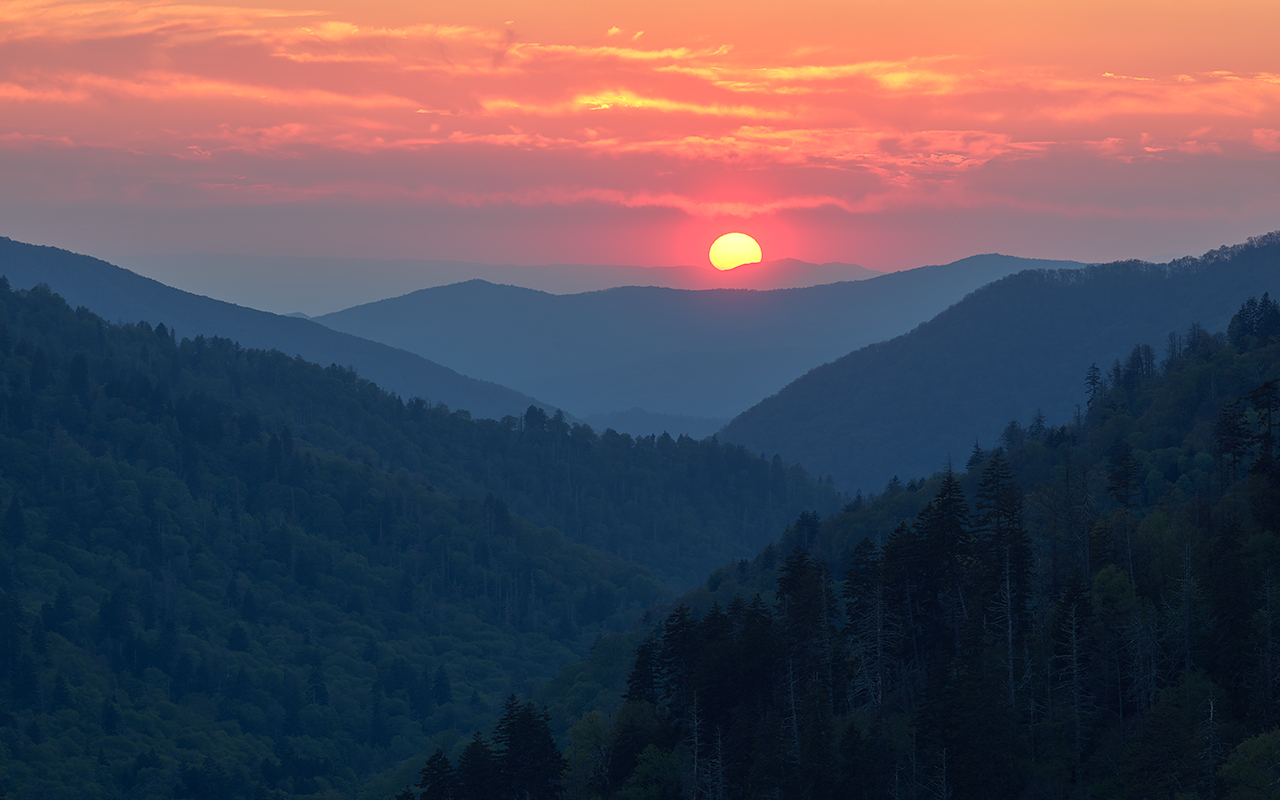 A hard rain moved through the area on the second evening. I was not sure I would be able to make a single photograph. Fortunately, just before sunset, the rain stopped. Although the cloud cover did not clear, fog began to clear in the valley due to the high moisture levels, creating an entirely different mood from the night before. Rather than the contrast of warm and cool tones in the first image, Image 2 shows the cool tones of the storm clouds along the horizon and the fog forming in the valley. 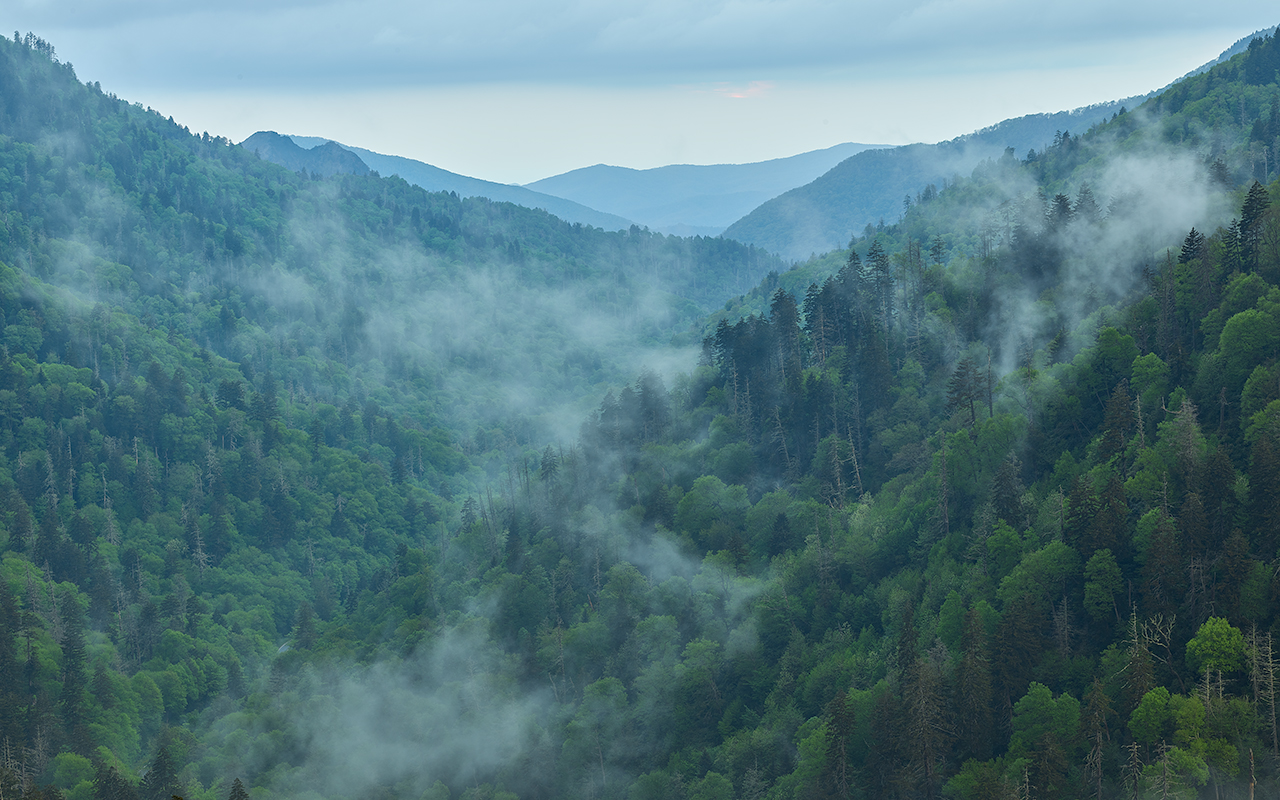 Image 2 “Fog in the Valley”

On the last evening, the cloud formations were ever-changing and interesting enough to become the subject of this image. Image 3 shows the most interesting cloud formation. To me, this cloud appears to be a profile view of a person wearing a toboggan preparing to eat a sandwich. You can see the person’s nose and open mouth as they bring the sandwich up to their mouth and take a bite out of it. You may see something entirely different in this image. 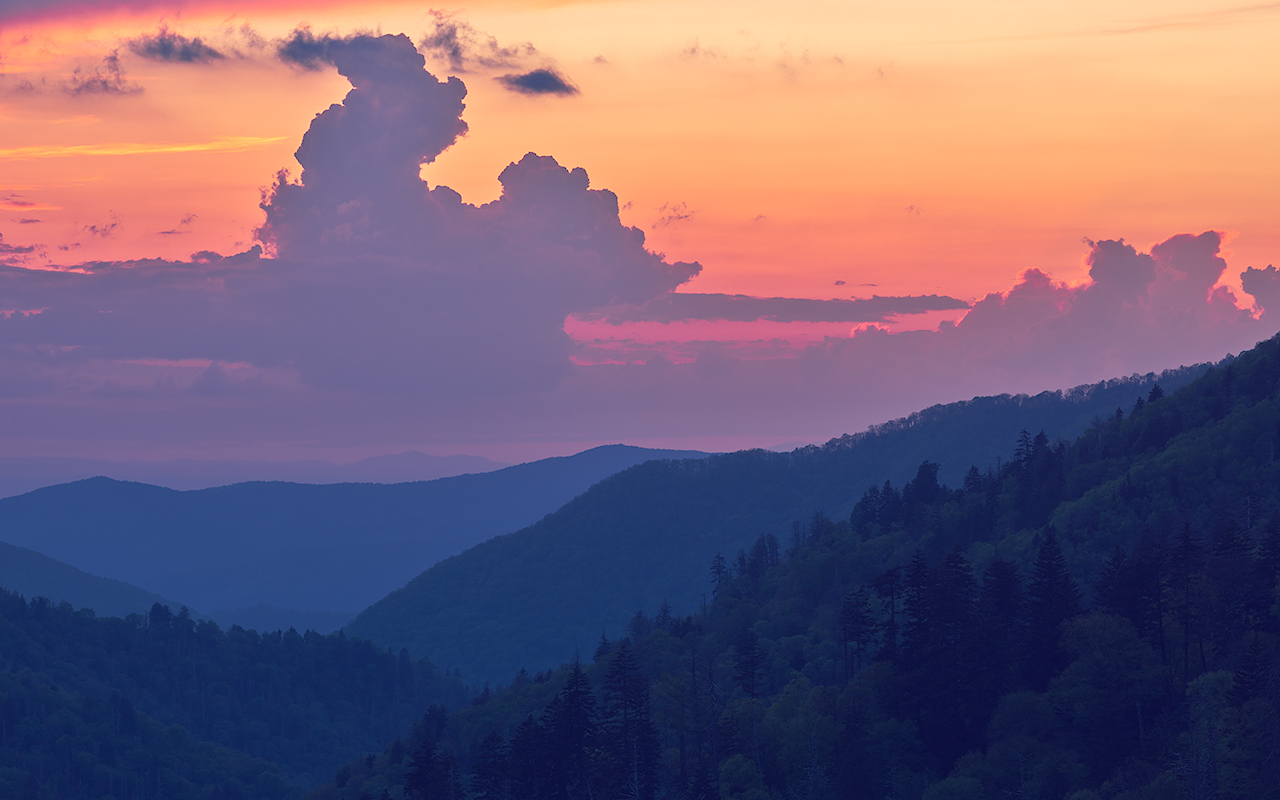 Sunsets are not always about color. Here we see three different images taken at the same location and essentially the same time of the day. Each image has a totally different subject, appearance, and evokes a different emotional response. The first image has the fiery yellow ball of the sun touching the horizon with contrasting warm and cool tones. This image is about a colorful sunset. The second image shows the formation of fog in a mountain valley as a storm clears. This image tells a story about weather in the Smoky Mountains. The third image focuses on unique cloud formations in the sky. Often people will see and interpret cloud formations differently. An interesting project would be to pick a location, possibly near your home, and arrange to periodically take at least one image at the same time of the day. By using the same scene photographed in differing conditions, one can get entirely different images with different emotional responses.